With heartfelt thanks to all those who have supported the mission of the Great Chesapeake Bay Schooner Race. 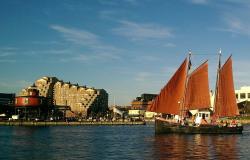 “Tugantine”  Norfolk Rebel is the world’s first (and only) sail-powered, schooner-rigged tugboat. The Great Chesapeake Bay Schooner Race got its start when, in 1988, Captain Lane Briggs of the Norfolk Rebel challenged the Pride of Baltimore II to a race down the Bay. Now owned and operated by Lane’s son Steve Briggs, the Norfolk Rebel is still in many ways the heart and soul of the GCBSR.

Schooner Alliance is a 105’ steel schooner built in 1995 in Florida. She is owned and captained by Greg and Laura Lohse of Yorktown Sailing Charters, LLC.

Captained by Steven Ormsby, Alliance raced on behalf of The Watermen’s Museum, also based in Yorktown, VA. The museum’s mission is to demonstrate the role Chesapeake Bay Watermen, from pre-colonial to modern times, have played in the shaping of our nation. The museum hosts historical exhibits depicting military and civilian water craft and activities, the crafts and methods of their trade, and a look into the lives of the people that have worked and fought on the water. The museum also is the destination for educational field trips, running programs for hundreds of schoolkids every year. GCBSR has lent its support to the Watermen’s Museum’s summer camp programs – sponsoring children in need of financial assistance and the families of military members and first responders.

The Alliance and the Watermen’s Museum have been longtime partners. Alliance is often seen bringing kids from the summer camp program out on the water, or having a cannon battle with the camp’s shore battery. 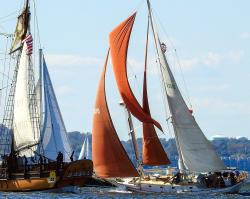 Captained by Linda Gunn, Schooner Farewell raced on behalf of the Maryland Science Center who believes that science forms a foundation for lifelong learning and curiosity. Their signature brand of science education celebrates the “how come?” and the “what if?’’ and celebrates a collective exploration that leads to a shared sense of discovery. 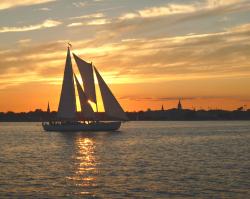 Schooner Woodwind was built to make sailing dreams come true back in 1993 by the Kaye family. For the past 27 years, guests from all over the world have sailed on her for public cruises, private events, multi-day cruises and educational cruises. Just 5 years later her sister, Woodwind II, set sail. Woodwind II is the “movie star” of the family – she played an important role in the movie Wedding Crashers. But it’s the classic Woodwind that sails every year in the Great Chesapeake Bay Schooner Race – and she’s known to be a fast competitor!

Captained by Jen Kaye, Woodwind is working in partnership with GCBSR’s education program to host educational programs aboard the vessel. Donations to Woodwind‘s campaign will be used to provide sailing experiences free of charge to local youth. Offering programs in STEM and navigation, Woodwind helps kids experience the magical Chesapeake Bay under full sail. 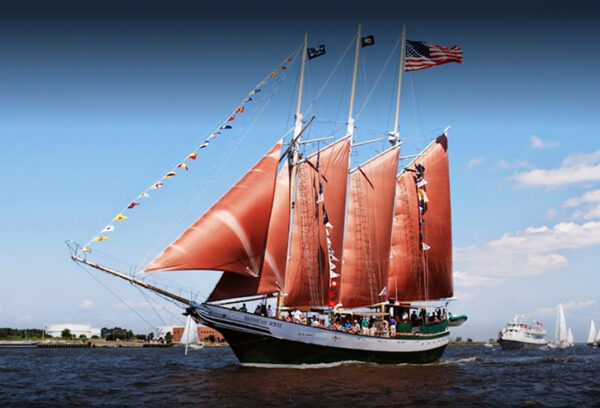 Since 1986, the American Rover’s red tanbark sails have been one of the signature sights of the Hampton Roads area. American Rover offers daytime and sunset Norfolk Harbor cruises under sail on the smooth waters of the Elizabeth River and the Port of Virginia.

Headed by Tom Van Benschoten, American Rover raced on behalf of the Elizabeth River Project. ERP’s mission is to restore the Elizabeth River to the highest practical level of environmental quality through government, business and community partnerships. 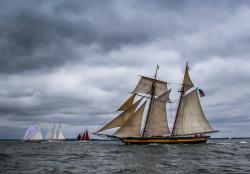 Pride of Baltimore II is an icon. For more than 30 years, she has sailed to promote historical maritime education, foster economic development and tourism, and represent the people of Maryland in ports throughout the world. Since her commissioning in 1988, Pride II has sailed over 275,000 nautical miles and visited more than 200 ports in 40 countries.

The history of Pride II is entwined with that of the Great Chesapeake Bay Schooner Race. In 1988, when the City of Baltimore launched her, Captain Lane Briggs of the Tugantine Norfolk Rebel challenged Pride II to a race from Baltimore to Norfolk, reviving a historic rivalry between schooners, captains, and cities on the Bay. With the challenge accepted, the Schooner Race was born.

Headed by Patrick Smith, Pride II raced on behalf of the nonprofit Pride of Baltimore, Inc., which owns and manages the ship. The organization relies on individual donations, corporate philanthropy, and grants to keep the Pride of Baltimore II sailing and serving the people of Maryland, year after year.