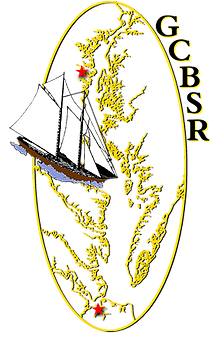 Schooner racing on the Chesapeake Bay is rooted in the trade rivalry between Baltimore, Maryland at the northern end of the Bay and Norfolk/Portsmouth, Virginia at the southern end. The fastest sailing vessels delivered goods and people to their destinations and often garnered the best price for their cargo by beating slower schooners into port. Over the years, commercial schooner designs evolved for the bay’s routes, taking into consideration shallow waters, local crops and regional needs, with speed being a primary concern to beat competitively loaded vessels into port. These schooners also played a critical role in our nation’s early wars. While there are no cargo-hauling schooners now working the Bay, there are a considerable number of schooners still in use as cruising vessels and privately owned boats.

In 1988, when the City of Baltimore launched her flagship modeled on those earlier vessels, Captain Lane Briggs of the Tugantine Norfolk Rebel—the world’s only sail-powered schooner-rigged tugboat—challenged Pride of Baltimore II to a race from Baltimore to Norfolk, reviving an historic rivalry between schooners, captains and cities on the Bay. With the challenge accepted, the Great Chesapeake Bay Schooner Race (GCBSR) was born.

In 1990, a weekend in October was set aside for what had become an annual event, and yacht clubs at the northern and southern ends of the race volunteered to support the schooners and crews in their efforts.

Over the 25 years of the Great Chesapeake Bay Schooner Race, there have been some incredible races with schooners going to the wire to win. Harsh weather conditions in some of the races have tested the mettle of the vessels, crews and captains. As many as 56 schooners have signed up for a single race, and more than 150—with vessels from as far away as California—have enjoyed the fall race on the Bay. The 2017 race was the fastest race in this long series. With strong following winds, several schooners set new records for both elapsed and corrected time. The schooner Virginia set a new time to beat of 11 hours, 1 minutes and 41 seconds, beating the previous record that she set in the 2007 GCBSR.

With the growth of the event and the resulting focus on these vintage sailing craft, the organizers and sponsors elected soon after the start of the event to maximize the value of the race in very special ways. The race brings focus to the maritime traditions of schooners on the Chesapeake and brings attention to the environmental issues facing the Chesapeake. All net proceeds of the race are donated to support youth education and other efforts aimed at saving the bay. This is why the Great Chesapeake Bay Schooner Race is proud to say that we are “Racing to Save the Bay!”